Watch Education page contains an overview of the major parts of a watch, as well as an explanation of how watches operate. Many complicated parts must all work in tandem in order to not only tell time, but perform a myriad of other functions. These could include a chronograph, altimeter, alarm, day/date calendar, moon phase, and slide rule bezel. Below are descriptions of the major internal and external parts and their functions.

The crystal is the cover over the watch face. Three types of crystals are commonly found in watches. Acrylic crystal is an inexpensive plastic that allows shallow scratches to be buffed out. Mineral crystal is composed of several elements that are heat-treated to create an unusual hardness that aids in resisting scratches. Sapphire crystal is the most expensive and durable, approximately three times harder than mineral crystals, and 20 times harder than acrylic crystals.

A watch’s hands are the pointing devices anchored at the center and circling around the dial, indicating hours, minutes, seconds, and any other special features of the watch.

The bezel is the surface ring on a watch that surrounds and holds the crystal in place. A rotating ratchet bezel moves in some sport watches as part of the timing device. If rotating bezels are bi-directional (able to move clockwise or counter clockwise), they can assist in calculations for elapsed times.

The crown (often referred to as the winding crown or winder) is the nodule extending from the watch case that is used to set the time, date, etc. Most pull out to set the time. Many water-resistant watches have crowns that screw down for a better water-tight seal.

The dial is the watch face that contains the numerals, indices, or surface design. While these parts are usually applied, some may be printed on. Sub-dials are smaller dials set into the main face of the watch. These can be used for added functions, such as elapsed times and dates.

The watch case is the metal housing that contains the internal parts of a watch. Stainless steel is the most typical metal used, but titanium, gold, silver and platinum are also used. Less expensive watches are usually made of brass that has been plated with gold or silver.

There are many methods for sealing down a case back. The primary methods for better water-resistance are screw-in and screw-down. Both serve the same general function, but there are subtle differences.

A bracelet is the flexible metal band consisting of assembled links, usually in the same style as the watch case. Detachable links are used to change the length of the bracelet. Bracelets can be made of stainless steel, sterling silver, gold, or a combination. A strap is simply a watchband made of leather, plastic, rubber or fabric.

The movement of a watch refers to the mechanics that power the ticking of the timepiece, and there are two main choices when it comes to analog watches (watches with hour hands and are not digital), quartz or automatic. What you choose really comes down to what you’re looking for in a watch. There are many ways to look at what’s attractive about both types of watches, but one way to look at it is the quartz watch as more practical and the automatic watch as more emotional.

Whether you’re a scuba diver or just a frequent dishwasher at home, you’ll want to pay attention to the water-resistance of your watch. Water-resistance ratings are listed in certain depths, typically in meters, but the numerical depth shouldn’t be taken literally. The depth rating actually represents the results of tests performed in a lab’s pressure chamber, and not real-world sea depths.
A watch marked as water-resistant without a depth indication is designed to withstand accidental splashes of water only. Do not submerge such a watch. Higher levels of water-resistance are indicated by increasingly higher acceptable depths, usually indicated in meters.
A watch with a back that screws onto the case provides a higher degree of water-resistance. Some crowns with a winding stem actually screw into the case to further increase water-resistance.
We do not recommend swimming or diving with your watch unless it has a screw-down crown (also known as ‘screw-lock’ or ‘screw-in’ crown) and is water-resistant to at least 100 meters.
Note: Water-resistance is sometimes listed using the abbreviation ATM, which stands for “atmosphere” and 1 ATM represents 10 meters. In Europe, “bar” is often used instead of ATM.
Below are typical water-resistance ratings and their corresponding parameters for real world usage.

Watches are typically measured in millimeters (mm), which might not be familiar to those of us without a lot of metric system experience. For a comparison, a United States quarter measures 24.26mm in diameter (0.96 inches), comparable to an average-sized woman’s watch. A larger-sized chronograph watch for men measuring 42mm in diameter is about the size of a regulation golf ball (1.68 inches).
Any given watch typically has three measurements:

The latching mechanism that closes to secure the watch band to your wrist. 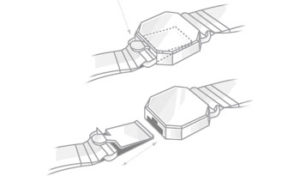 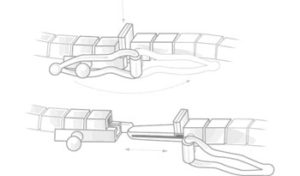